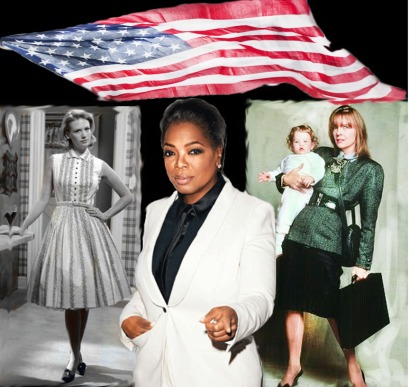 The origins of the American Dream are unknown, but this underlying theme has lasted with America for over 200 years dating back to the colonial time period. It is engrained in the very fabric of this country. And there are some people who believe that we all have the same road to the American dream and that all we need is hard work, determination, and initiative. For the most part, this is true, if you do these three things, it happens. But the reality is that we don’t all have the same road, because we don’t have the same starting place, never have and to be honest, we never will. But that’s okay. Is Warren Buffett’s achievement of his American Dream any less than Oprah’s, probably not; every son of an investor/congressman did not have his successes. But let’s not act like Oprah’s pursuit of her American Dream was not more challenging. No one is saying being born into a certain family is wrong, but we cannot negate the fact that there are some challenges certain groups of people have to face. That is what diversity is all about, and learning to first understand those differences actually helps us move beyond them, but do you know what doesn’t:

ignoring that these differences exist or

separating ourselves based on these differences, because we only need to be around people who “understand” us.

No one will understand you, if you don’t tell them. When I hear people complain about close-minded people, and that it’s not their job to bring diversity to them, you should ask Martin Luther King if he would trade you jobs…. I can hear him now, “All you had to do is talk to someone, maybe several times, be a little uncomfortable, and make an honest effort to help make them understand, and you couldn’t do that, WHAT?”

Since I began blogging, I have not written directly about diversity, because it’s what I do in my day job, but I find it so improperly defined and viewed in America that we will never fix our problems with race, sex, or religion if we continue to separate ourselves or act like if we ignore it, and it will go away.

So what does the American Dream have to do with this?

Women often have a different road to the American Dream, and when, we as women embrace the differences it makes reaching the goal easier and more attainable. That’s really what feminism is truly about, it’s not that we want to be separate, but our ability to reach the American Dream is just different, and that’s okay. And we have to keep talking about our struggles and successes. I came to this idea, because there continues to be so much talk about feminism, I can’t help but think about it on a regular basis. As a young single woman, with a good education, and no kids, I think about it quite often, whether it’s other people’s perceptions I face, the questions I have to answer to, and the seats I’ve been told to take, and wait my turn. I can firmly say I believe that my life experiences would be very different if I were a man. I don’t think this is true for all women. There are areas that we, as women, have successfully navigated without as much trouble. However, I believe there are areas that we are still forced to break the glass ceiling, so yes, I believe feminism is part of that answer.

So I ask myself, why DO people have such a problem with this idea of feminism. And then it hit me: The American Dream. That’s what we are all striving for, as Americans. Achieving the American dream is different for each person, but to some extent everyone has dreams of success, and this success looks very different for each person, it could be measured in money, family, fame, notoriety, respect, salvation, or even legacy. The idea of the American dream dates back to the beginning of our country’s origin. Settlers came to America for their freedom and to be successful in their own right.

Now the reality is that for people to really obtain and achieve the American Dream there has to be a reasonable amount of people not reaching for it or failing to obtain the American Dream. Over the years, the number of people trying to reach for the American Dream has increased as America’s population has grown, and the number of different groups  striving for a seat at the table has also grown. As the numbers increased, those who had already achieved the American Dream were skeptical, presented challenges to the new groups every step of the way… we can look back to the Germans, Catholics, Italians, African-Americans, Jews, Hispanics, women and so on. And I’m not just talking about majority who are not cooperative, minority groups can become just as combative, because someone is trying to take a piece of their pie. Now I am not saying that these people feel threatened because they are racists, bigots, or sexists (although some may be), when someone is crouching on your territory, it is only natural to have a negative reaction.

That’s what I would say about the reaction to Emma Watson’s speech at the United Nations a few weeks ago. Here you have a young lady, fresh out of an educational institution, using her influence to create an initiative “to galvanize one billion men and boys as advocates for ending the inequalities that women and girls face globally”. (Source) Sounds, positive, right? Yet, there was such a negative reaction to her speech. Why? She was asking a whole segment of people to give up a little piece of their pie, and not just in America, but around the globe. And that’s the problem. Most successful people, especially women, didn’t ask, they just did it, even if they had to climb insurmountable obstacles. So let’s embrace the idea that we are not all given equal opportunity, but we are given an opportunity, and no one will give it to us. What we do with the opportunity, is really up to us.  The opportunity to continue to break barriers, and change the minds and hearts of those around us, is in our hands.

If we just look at a microcosm of women, you see a variety of differences that are truly beautiful. We have different dreams and goals. There are some of us who want to be the next CEO of a major company, or handle the small, quaint shop in a little country town; there are some of us who want to reach the highest point in their career while remaining a good and attentive parent, or taking care of the family and the household full-time. What none of us want to be inhibited from is pursuing our destiny, our American Dream.  But we must not ask for it, we must take it.

Check out my “BE DIVERSE” Page