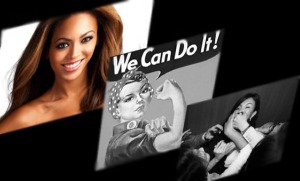 “Okay, I promise I’m not a feminist. Well, I mean I am a feminist based on the definition, but I don’t want to be called a feminist, because I’m not a man hating, over-sexed, abortion pushing, I need my birth control free kind of woman,” – For starters, feminism has never been about any of those things, and if you think it is, just stop reading, and go read a history book. Many of those stereotypes have manifested based on actions of a small minority, and many men (and women) choose to focus on negatives and improperly define what a feminist is. However, what’s more frustrating are women and feminists who limit what the definition of a feminist can be;  No one group or person should define what feminism is for everyone.

Beyoncé’s performance at the VMAs introduced feminism into everyday conversations on a whole new level for this generation. One of the reasons I personally find the conversations about feminism exhausting at times is everyone wants to start from a different place or definition, including the stereotypes listed in my introductory paragraph. However, the generally accepted definition is simple and straightforward: “feminism is a collection of movements and ideologies aimed at defining, establishing, and defending a state of equal political, economic, cultural, and social rights for women.” (Link)

Feminism isn’t something new, and Beyoncé calling herself a feminist is not new for her. Growing up with Beyoncé, and despite what people want to say, Beyoncé has always been a feminist in her mind, chipping away at the barriers that she faced as a talented black female who embraces her sexuality. Do I like all the images she puts out? No. But does it make her any less of a feminist? Not necessarily.

For a young black woman coming out of Houston with a pursuit of being a star, she has undeniably helped define, establish and defend a state of equality for women who want to be in her position. Too bad it doesn’t apply to everyone, and appeal to everyone, and it shouldn’t. Just like Sheryl Sandberg, a woman I deeply admire, doesn’t have the same view of what being a feminist is, as her experiences are very different from mine, and there are parts of “Lean In”, that I don’t agree with, but I don’t go stomping around saying she’s not a feminist.

Feminism can’t mean the same thing for each person, and we shouldn’t expect it to. Feminism isn’t a cookie-cutter word that can be applied in a perfect little box, and I know that I am not the first person to say that, or have the thought. But yet, we find our selves trying to apply it. Isn’t that why the second-wave of feminism started? Women were tired of their life’s sole purpose was finding a man, becoming a stay at home mom who was dependent on their husbands. Well, there isn’t a problem with being a stay-at-home mom, the problem was that they wanted ALL women to do just that; it’s the same as requiring ALL women to work and not allowing women to stay in their home and raise their children. Its ridiculous, right?

Now I am not trying to over simply feminism as if there weren’t principles that shaped and defined the three movements and some of those principles still reign true.  However, I think feminism has to take a different course. Women are a diverse group of people, and reaching that equality is not the same for all of us. More importantly, we need to stop focusing on what a feminist should look like, and rather seek and find answers for problems that continue to keep us from obtaining equality in certain areas, like… the lack of women in politics.

There is no denying that there are not enough women in office in our state, and national offices for either party. Regardless of whether the numbers of the men to women ratio is contested, when you LOOK at the numbers, it’s quite depressing.

Let’s spit some facts for real quick from 2013: Link

And if we look internationally, in 2014, the United States ranked 84th in worldwide female leadership, which is 15 spots down from 2008 when we were ranking 69th, so it seems like we’ve gotten worse. (Source: Inter-parliamentary Union of Geneva)

The numbers are clear that women are either not running for office or simply not winning elections.  And it is mostly because we can be our own worst enemy. Women candidates are more likely to be scrutinized (by women), receive less donations than their male counterparts (from men, and yeah, women), and generally, have more commentary about their work/life balance; when men are not asked or questioned in that manner at all. Now clearly there are women, who successfully run for office, and win, so why does it matter that we need more women? The age old response is why not have more? But it’s true. We as a sex are in denial that it is okay for us to be less represented. We should be encouraging woman to speak out and up, and actually support them, and it has nothing to do with taking anything from men, but we should want it for ourselves.

For this article, I braved the internet to read “Women against Feminism”, and I’m all for free speech, so no, I don’t think the site needs to come down. But I do believe many of the responses were disturbing, because some of these women are truly misinformed.  There are women day-in and day-out whether in their professional, social, or at-home life that are not treated equally, fighting for their piece of the pie, because there are still real barriers. Just look at Beyoncé?

Beyoncé, love her or hater her, is such a force to be reckoned with, conversations about her success should be able to occur that don’t implicate or attribute a large part of her success in some form to Jay-Z.  Many blame her good girl gone bad switch was based on his corrupting; that her star power would not have reached heights without him; and he truly IS the businessman. And this all may be true, but Beyonce was writing lyrics before she met Jay-Z, Beyoncé’s bank account is bigger, she’s the one performing at the Super Bowl, for the Presidential inauguration, she can sell out her own shows, and can release an album with no publicity and sell millions; yet, we have to find some way to give Jay Z credit some for her success, and all we attribute to Jay-Z’s crossover to mainstream is that Beyoncé changed his sense of style and living habits. And when I say we, I mean these are comments from women, some from feminists! This is because we are systemically flawed.

Women, we have to take what is ours and be proud, and shouldn’t have to be concerned what men or even feminists, are going to say. But most importantly, let’s not put feminism in a box either, because we will never reach equality hiding. Beyonce doesn’t and shouldn’t have to apologize for it.

5 responses to “FLAWED: Society’s Critique on Beyonce and Feminism”