ON AIR: The Never-Ending Story (the news) Needs a Face Lift 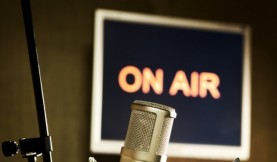 “It is not the young people that degenerate; they are not spoiled till those of mature age are already sunk into corruption.” – Charles de Montesquieu

As a critic of my generation, I find my purpose to question what we are doing to push ourselves to our fullest potential, but I want to do a little reflection on the idea that is often unfairly placed on our generation: instant gratification. More pointedly, that our attention and interests are fast and fleeting that the reward must be quick or we lose attention. Many scholars point to the way we donate to viral causes instead of immersing in long term involvement and participation. For instance, we donate to causes like the “ice-bucket challenge” (of recent), or the skyrocketing involvement with the Stop Kony campaign that quickly disappeared in 12’. I am not necessarily disagreeing with this assessment, but I would contend that this instant gratification was taught to US. The dreams and visions of the generations before us have manifested very differently than ever expected. So blame it on the over saturation we inherited…

Cable news today is constant and never-ever ending. When the idea of a 24-hour TV news station was conceived, it was brilliant. Ted Turner, creator of the first 24-hours television news station, Cable News Network (CNN), envisioned providing the news to more people and at different times of the day. Prior to the 24-hour TV news station, depending on your job or responsibilities you would miss the afternoon or evening news and you might not know what’s going on locally or nationally. And more importantly, Turner wanted Americans to have more access to the world. “He wanted to shrink the world. He wanted Americans to understand the world, and not be isolationists, not be comfortable in our little cocoons.” (Source). Sounds great, doesn’t it?

In the beginning, CNN was able to be the leader of pushing news stations to be more on site, globalize their stories, and provide live coverage by any means necessary. Today, the news often feels like sound bites, tantalizing headlines, the number of likes on social media (as everything else) and less and less about substance. The original CNN’s goal was to break the news first, push the limits, and provide in-depth coverage. Today’s goals are shaped after those same ambitions, but money and competition has pushed the 24-hours news cycle to produce very different results.

All the (American) 24-hour stations (CNN, FOX, MSNBC, etc.) now-a-days try to break stories too early before all the information is available, or pursuing ANY story that will “excite” viewers instead of what’s actually happening in hopes of catching our supposed fast and fleeting attention span. And often times, content, research and investigative journalism has been thrown out for pundit opinion. Sometimes it feels as if stations would rather do a talk show with multiple opinions then an in-depth story.

How did this happen? Many cite the inventions of Twitter, buzzfeed, TMZ, the Huffington Post, etc., show the engaging news, hot topics, videos, because our generation only cares to a certain point. That these outlets have become popular because of the lack of our ability to stick with a story.

This is the farthest thing from truth. The reality is everyone is telling the same story, in the same way. Yeah, FOX news may be to the right, and MSNBC is to the left, and CNN goes where it feels at the moment. To me, the news is no longer special. We don’t pay attention, because news stations are not willing to take risks and really do something different; outside of different hosts and a new technology that doesn’t delve more into the story. They are not investing and studying ways to provide the news to our generation. What happens today, news stories are covered fervently, day in and day out, until the next big story breaks, and then the news stations forget about it. Some people with personal connections may try to keep up to date, or have to go to the Internet and hopefully a news source is still following the story.

Look to the story of the kidnapped Nigerian girls and the “#bringbackourgirls” campaign. Last week, the Huffington Post had a writer provide an update, but there are few updates regarding the story when you google the issue, and in the HPost’s article there are some startling revelations that make you wonder why we’re still not interested, such as the fact “Not one student has been rescued”!!!! (Source)  If this were the 80’s, CNN continual coverage from that era could’ve pushed governments into action as the once infamous “CNN effect” was coined due to the major impact CNN had on the conduct of states’ foreign policy in the late 80’s and early 90’s. There was a time when the news was pushing our country, today, it’s too busy following the dollar.

In the opening of Ted Turner’s Life Class with Oprah, he said, “Nobody studied their competitors harder than I did… and then took a risk”. If only they would listen his advice now. A lot of people still get their news from twitter and Facebook, but many still choose, as I do, to read the long articles from a magazine such The Atlantic, Fortune or from newspapers like the Wall Street Journal and New York Times. Sometimes I want the in-depth well-researched story and sometimes I do want my TMZ. Unfortunately, at the same time, TMZ has on occasion broke stories that the “real” news didn’t even pursue. I want the news stations to fight for the right stories and cover the necessary issues going on in America and abroad, because that’s their job, if they do that, the people will come, my generation will come.

So don’t say our attention span is short, we have nothing to watch or to look forward to.

One response to “ON AIR: The Never-Ending Story (the news) Needs a Face Lift”